Earth-friendly buildings that are people friendly too

ARCHITECTURE Earth-friendly buildings that are people friendly too; that is what team Good Earth is doing. Shilpa Nair Anand learns that they were selected as one among four innovators globally by Time Magazine.Good Earth’ has a nice ring to it, it conjures up ideas about being fair, being considerate about caring for earth. The philosophy behind it, architecture is “not just building, it is also about building life or creating community living,”, says Mathew Varghese, Director – Operations ‘Good Earth’.

The conventional notion of a builder’s office is an elaborate all concrete and glass swanky affair. But the ‘Good Earth’ offices at Vytilla are an anathema to the conventional notion that real estate development has become. In fact even the company’s ad campaigns are very different from how builders usually advertise their products or services. Nature, greenery, eco-sensitivity are the catchwords and ‘Good Earth’s USP as well.A visit to their main office is an eye opener. If you are looking for the conventional builder’s corporate office, you are in for a surprise. Situated on the banks of the backwaters at Vytilla, a four-storey structure on the left goes up like a lighthouse. On the right are the conference room and another office.

The conference room is a story by itself, igloo-like in hot country. Airy and well-lit, both of which are natural, making use of the resources that are available in plenty.Such is the eco-friendliness that suddenly, we find we have a rooster for company at the conference hall, disappointed that the hen is nowhere he expected to find it! And if “low cost” is what you are thinking, you are way off the mark.“We are not into low-cost construction, although we can do that as well but ‘Good Earth’ is not about that. It is about sensitivity and catering to the requirements of people who are going to live in a house,” says Mathew Varghese. There are six people behind ‘Good Earth’ – Jeeth Iype, Stanley George, Mathew Varghese, Binu K. Jose, Benny Thankachan and Vinod Cyriac. Good Earth operates in Bangalore, Kozhikode and Kottayam. 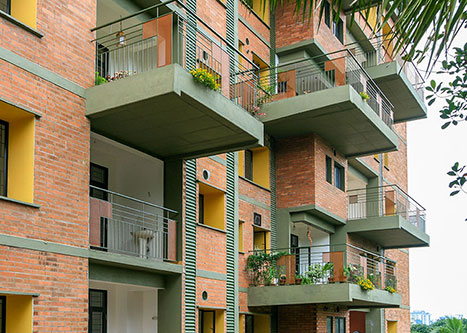 TIME magazine after a global search for innovators building a greener world has selected the ‘Good Earth’ team as one among four innovators globally and they grabbed the first award instituted by the Kerala chapter of Indian Institute of Architects in public buildings category in 2007.“As construction goes vertical, people get far removed from nature, and therefore we came up with the concept of terrace garden or a garden on the balcony. With that people living in high rises get their own personal piece of nature,” says Mathew. When it would be convenient for builders or developers to simply standardise and fabricate assembly line shelters there is this company that insists that clients are not mere numbers but real people with individual wants.

Therefore each flat in each project by ‘Good Earth’ is built in accordance with what each family and each member of the family wants. It is not just about economics but also about conscientious aesthetics. Something as mundane as a space to do the laundry and drying clothes is given attention to – the apartment projects have provision for “laundry modules” on the terrace for individual families, a grill enclosure that can be locked up when not in use.Living apartment style has become associated with each family becoming an island in its flat with no communication with the outside world. It is paying attention to the tiny details that matter that sets ‘Good Earth’ apart.Being able to enjoy the rain or the lightning for that matter while living in an apartment seems to be part of the building philosophy.Re-introducing the concept of living as a community where people do forgotten things like waving at a neighbour or smiling at them.

“Having bay-windows, for instance, where children can sit, see each other, maybe communicate in some manner. At least this is what happened where I live,” he adds. Most of the apartments, according to Mathew, overlook the common areas so that people are not or do not feel cut off from rest of the population as is wont to happen in an apartment block.Mathew says that ‘Good Earth’ projects are by no means cheap, in fact they are marginally more expensive than other builders. The reason is that “we use less energy sensitive materials say, for instance better quality premium bricks (terracotta) which are more expensive than the ones usually used.”Besides the raw materials working out the logistics of living spaces that are varied too is challenging. Thrown in for good measure are rain water harvesting and waste management for the complex. In order to utilise rain water, the paving material used is conducive for maximum percolation of rain water. Living in an apartment block no longer means living in assembly line flats, but rather your own space made keeping the person in mind.So, here’s to saying hello to your neighbours.

Shilpa Nair Anand in Kochi Metro Plus for The Hindu