The scent of damp earth greets me as I enter Palmgrove. It has just rained, one of the unexpected summer showers which are light and refreshing. The coconut and palm fronds are swaying in the gentle breeze, casting a patterned shadow on the ground. The sky is still slightly overcast as charcoal gray clouds seem to be whispering soothing tunes into my ears.Tucked away from the hustle-bustle of the city in the gentle and warm shade of the grove, Good Earth Palmgrove lies along the slopes of the winding roads that lead to coconut plantations, green nurseries and paddy fields. Where the white egrets soar across the blue tinged sky, while occasionally settling on the water buffaloes that forever lie submerged in the muddy waters. 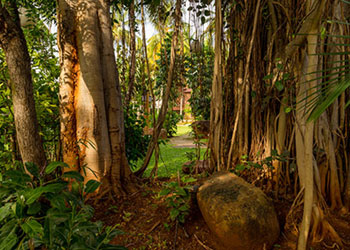 The Palmgrove community has been fashioned into clusters being located along the slope of the land, interspersed with vibrant, interactive gardens, community spaces and a swimming pool reminiscent of the old world open to sky ponds in ancient temple premises.Little rivulets gush alongside the pathway and I skip over little puddles towards the first cluster of homes. Bright fuchsia and peach colored flowers cut a flamboyant figure against the fresh green grass and vallari creepers climbing the sober understated white walls. The energy in the air is palpable. It is like a fusion between relaxation and excitement. Because, while the homes exude a feel of understated elegance the wild jamboree of the luscious gardens in the front provide plenty of character to the space. There is also an ancient Banyan tree, shrouded in the light mist evoking the image of a sacred grove where one finds solace even in the middle of chaos. 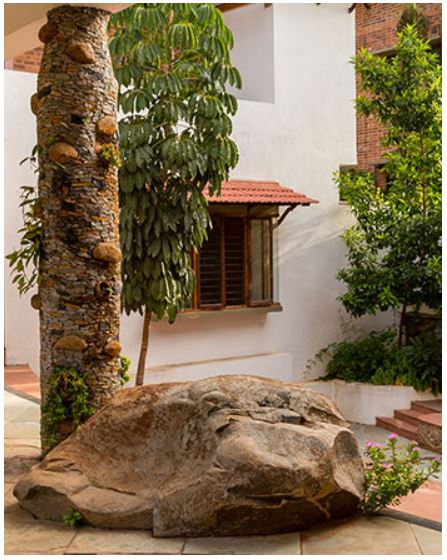 Let me take a moment here, to paint you a picturpg8e of the homes.Under a traditional tropical roof shape, an integrate space is constructed; mixed spaces of both indoor and outdoor. A seamless blend of glass and timber with brick blocks. Airy and elegant, the homes primarily maintain the connection with nature. Bespoke homes built to suit the requirements of the owner while retaining a certain flavor of architectural appearance.Each space has its own uniqueness of view and exciting elements. The natural tone both interior and exterior and raw-exposed structure enhance the appearance of the contemporary home unified with the vast landscape. The intimacy of the spaces becomes more defined due to rustle of the palms, lovely decking terraces and the large glass windows which let the sun rays stream in gently.