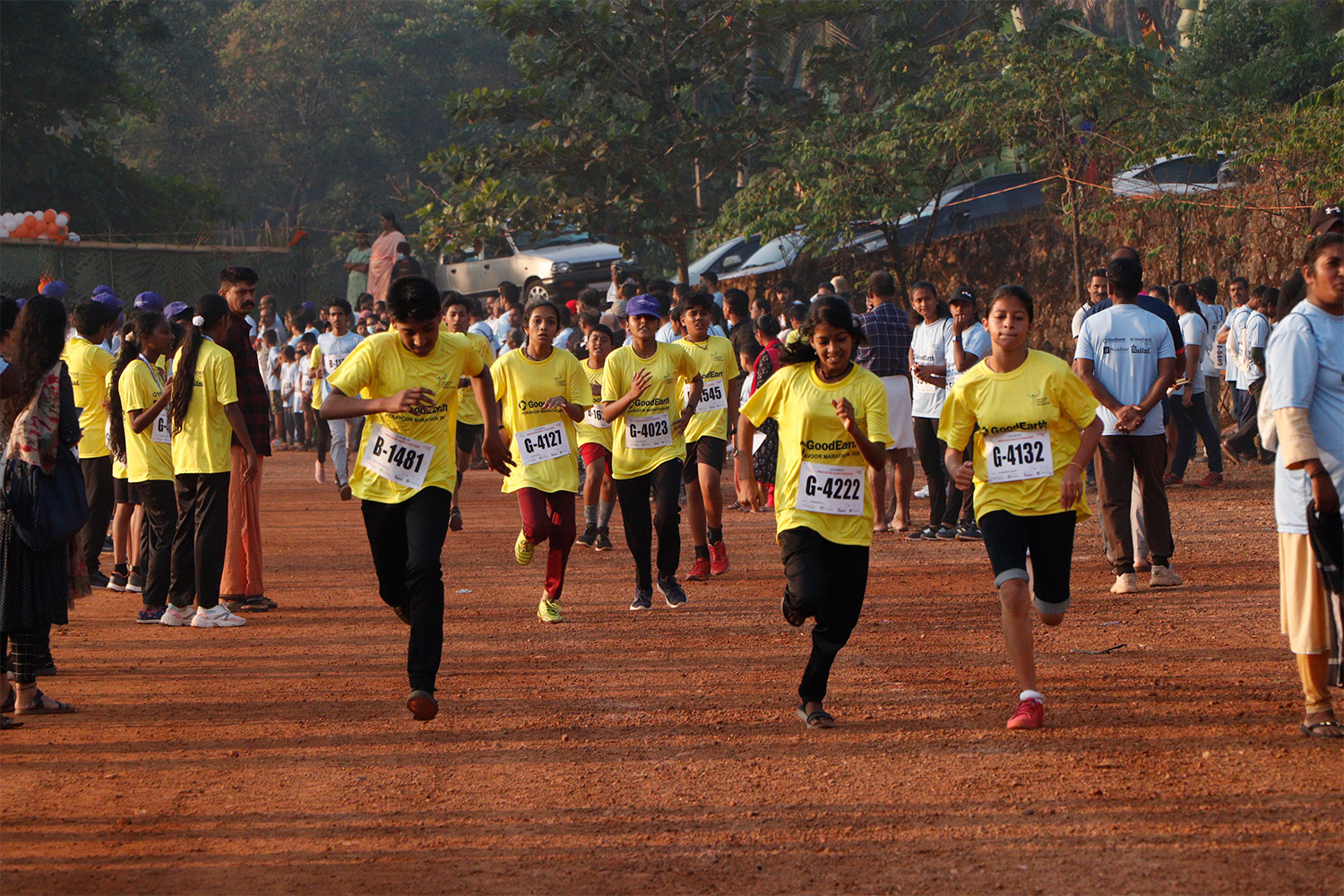 The playground of St Joseph’s Higher Secondary School, Peravoor, Kannur district, was a beehive of activities on December 23, the day before the 4th edition of Peravoor Marathon (10.5k).

School, college students and youths alike stormed the help desk to get the kits, jerseys, bibs…many parents and teachers from various schools were busy cross-checking names in the list.

Songs emanating from the school and the infectious energy of the students served as the background music throughout. The school, before it was closed for the Christmas holidays, and the sports ground, took on the character of a bride. There was festive fervour everywhere.

Everyone had a job or a task to attend to.

Stalls with fresh fruit juices, natural ice cream that slaked everyone’s thirst, cut mangoes, gooseberry and pineapple soaked in brine, a common sight in Kerala, Fire Service Station stall, a stall showcasing the journey and work of GoodEarth, the title sponsor, and a books stall were a draw.

Popular Malayalam film songs provided the welcome break in the sweltering heat, even as a team of youths in mundu played cricket oblivious to the heat, while others sweated profusely under the pendals. 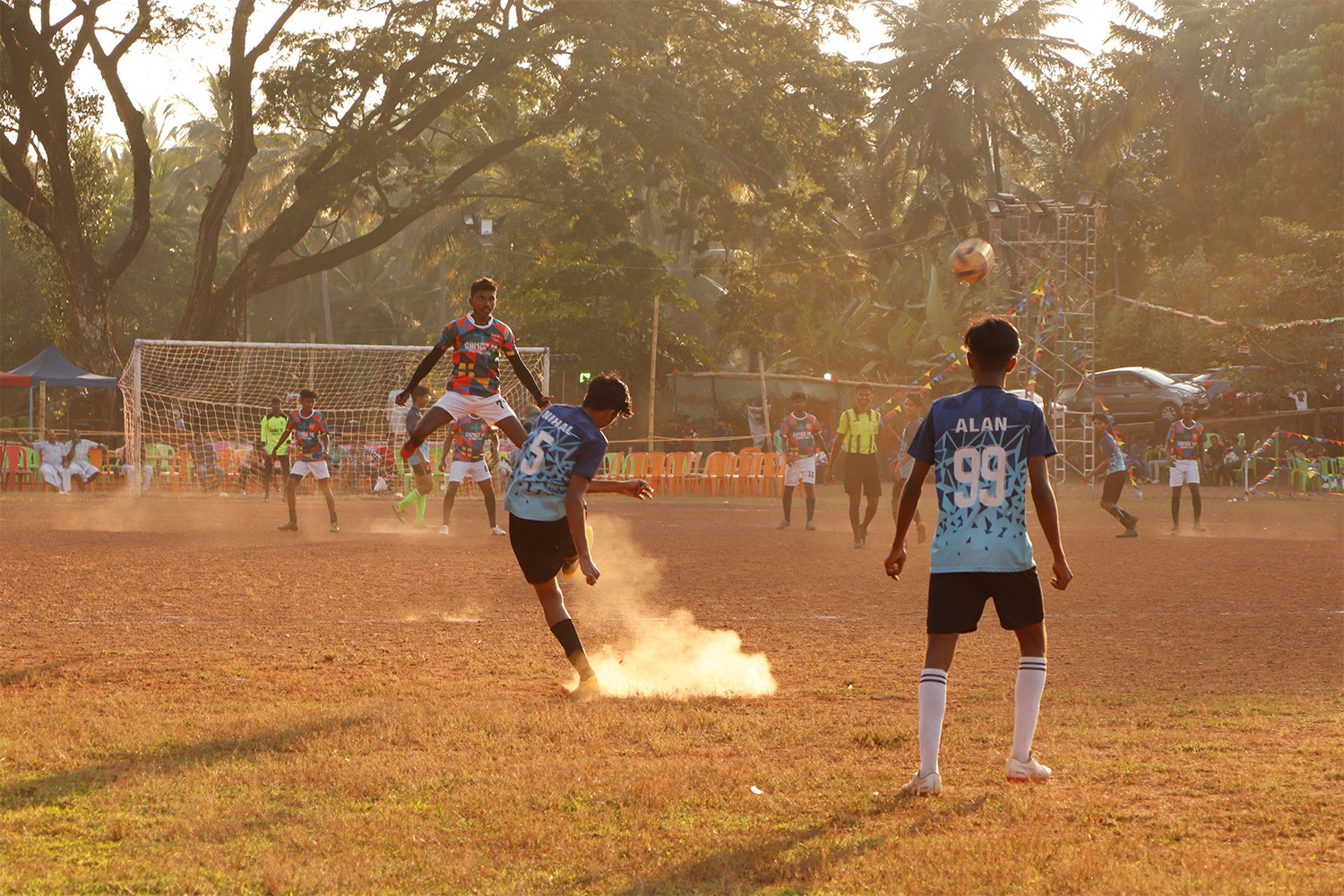 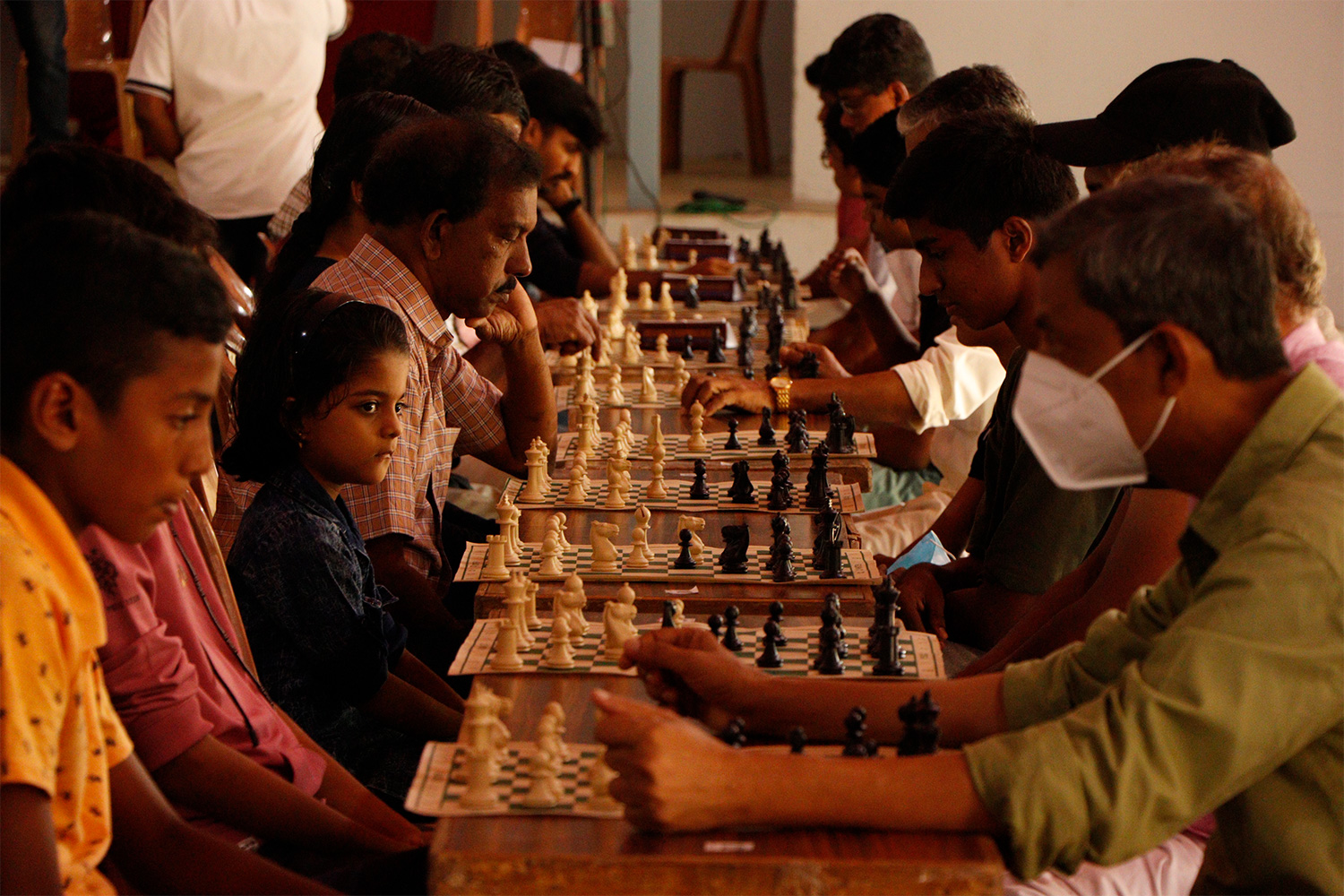 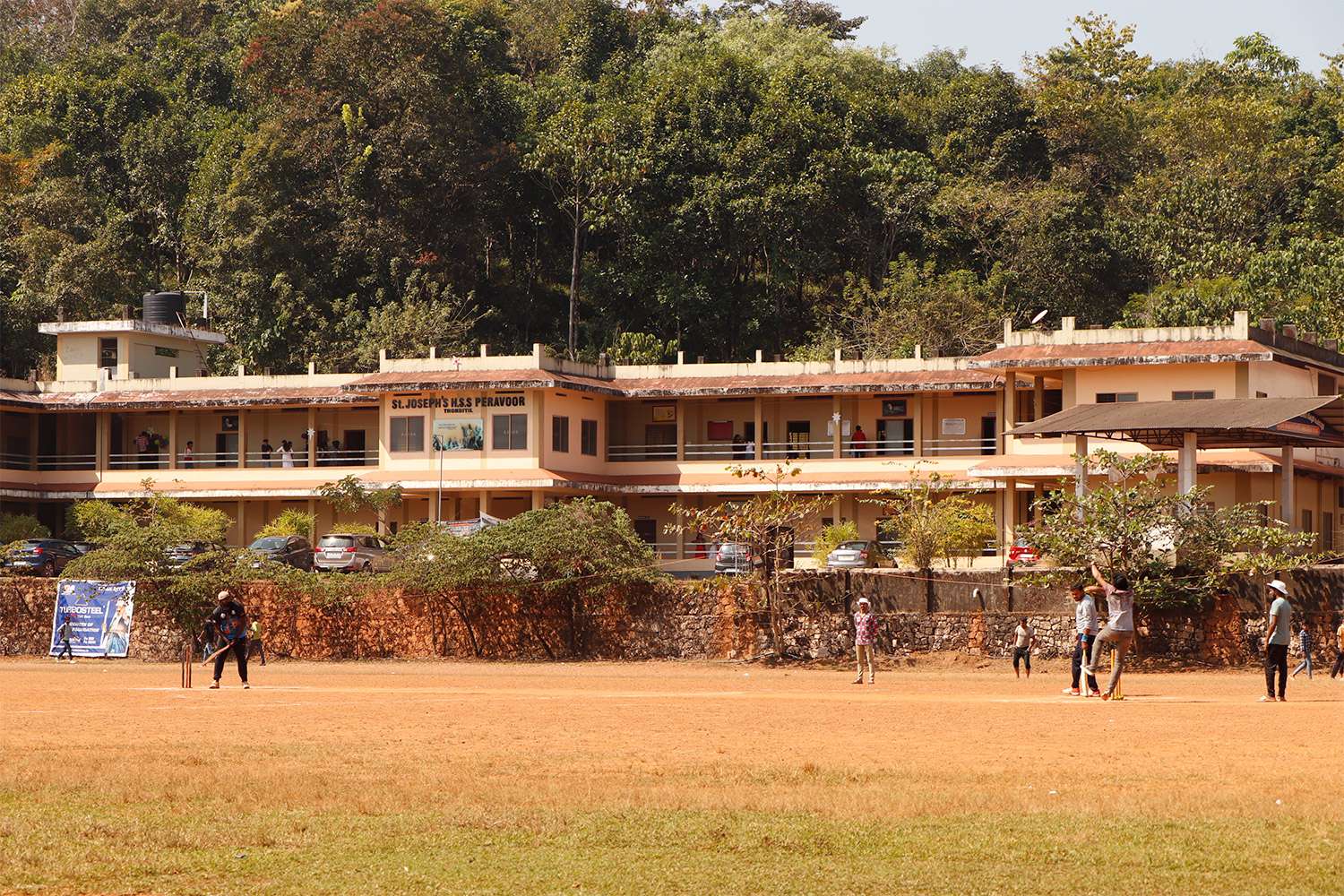 Unlike the previous three marathons held in 2017, 2018 and 2019 respectively, the fourth edition on December 24, 2022, had a week-long carnival of sports showcasing competitions in archery, chess where the young took on the seniors with elan, volleyball, football, swimming, cricket, climbing the pole and the popular traditional competition of the region, the tug of war, in which more than 500 youth participated.

Morning Fighters Endurance Academy alone led by M C Kuttiachen, former police officer and trainer fielded as many as 600 runners for the marathon. He trains youth in endurance tests for various uniformed services.

Yellow and soft blue colours painted the circle near the Jimmy George Sports Academy. Kids, youths and the elderly alike in their blue and yellow jerseys and a string bag slapped to their back walked, even as the cold air enveloped them, while many ran warming themselves up before they could run on the count of three. 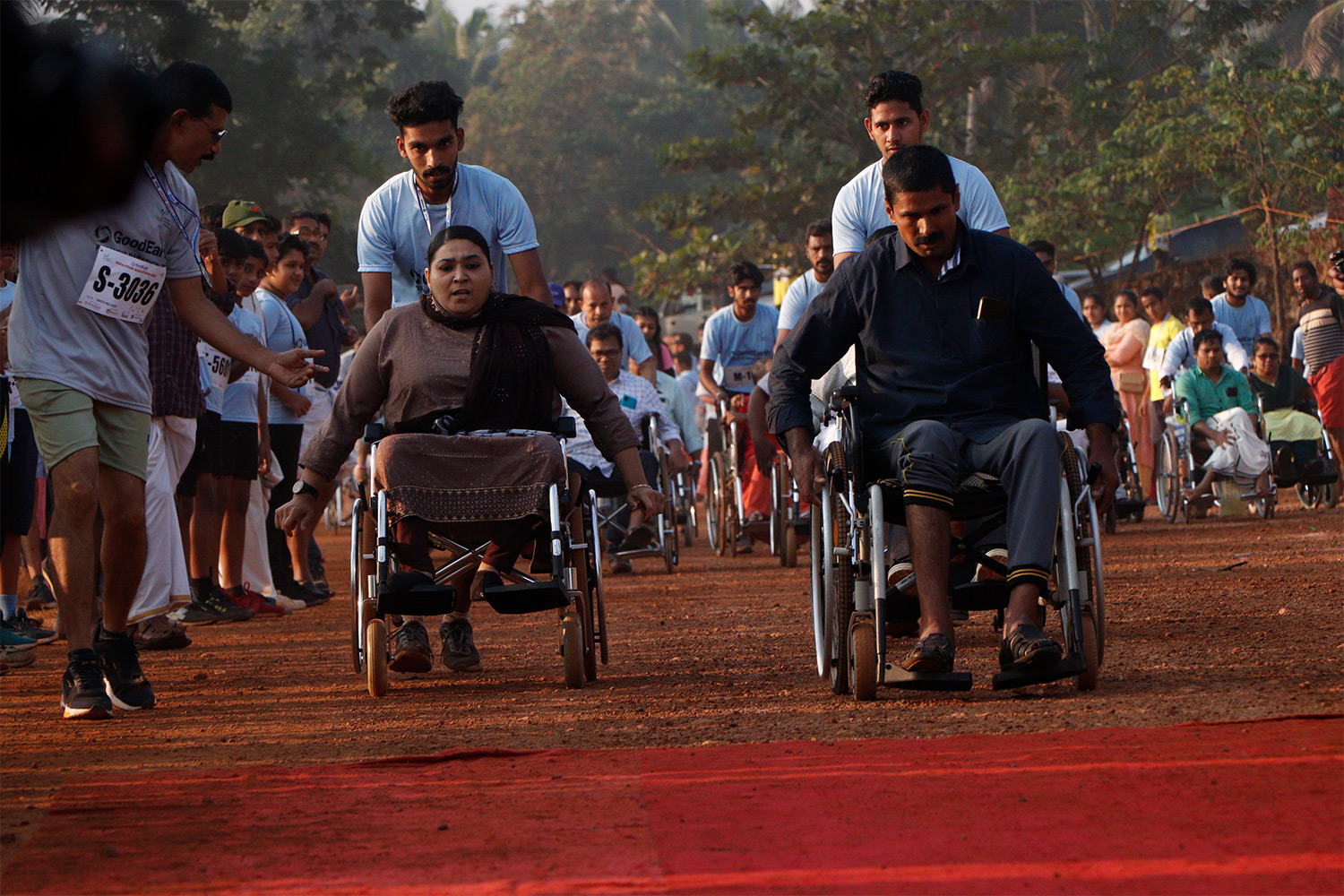 For Seenath this was the second marathon. Being confined to a wheel-chair did not seem to dent her spirit. She along with more than twenty participants ran the Fun Run 3.5k to much cheer and applause.

Seenath makes paper pens, crafts many things and sells them through schools and supports her family.

Various products such as paper cups, pens, soaps, pickles prepared by those in the palliative care and looked after by Samaritan Old Age Home and Palliative Care Centre, Chengalayi, Kannur, were sold at a stall in the playground.

“I felt awesome participating in the wheelchair race. And I shall take part in the fifth edition of the Peravoor Marathon next year,” says Seenath.

Elderly women wearing jerseys atop their sarees and taking long strides infused the marathon with an energy.

Septuagenarian Indira nudged her 11-year-old-grandson Hrishikesh to run, while she walked the fun run trail with her hunched back, encouraging the young to pick up pace. 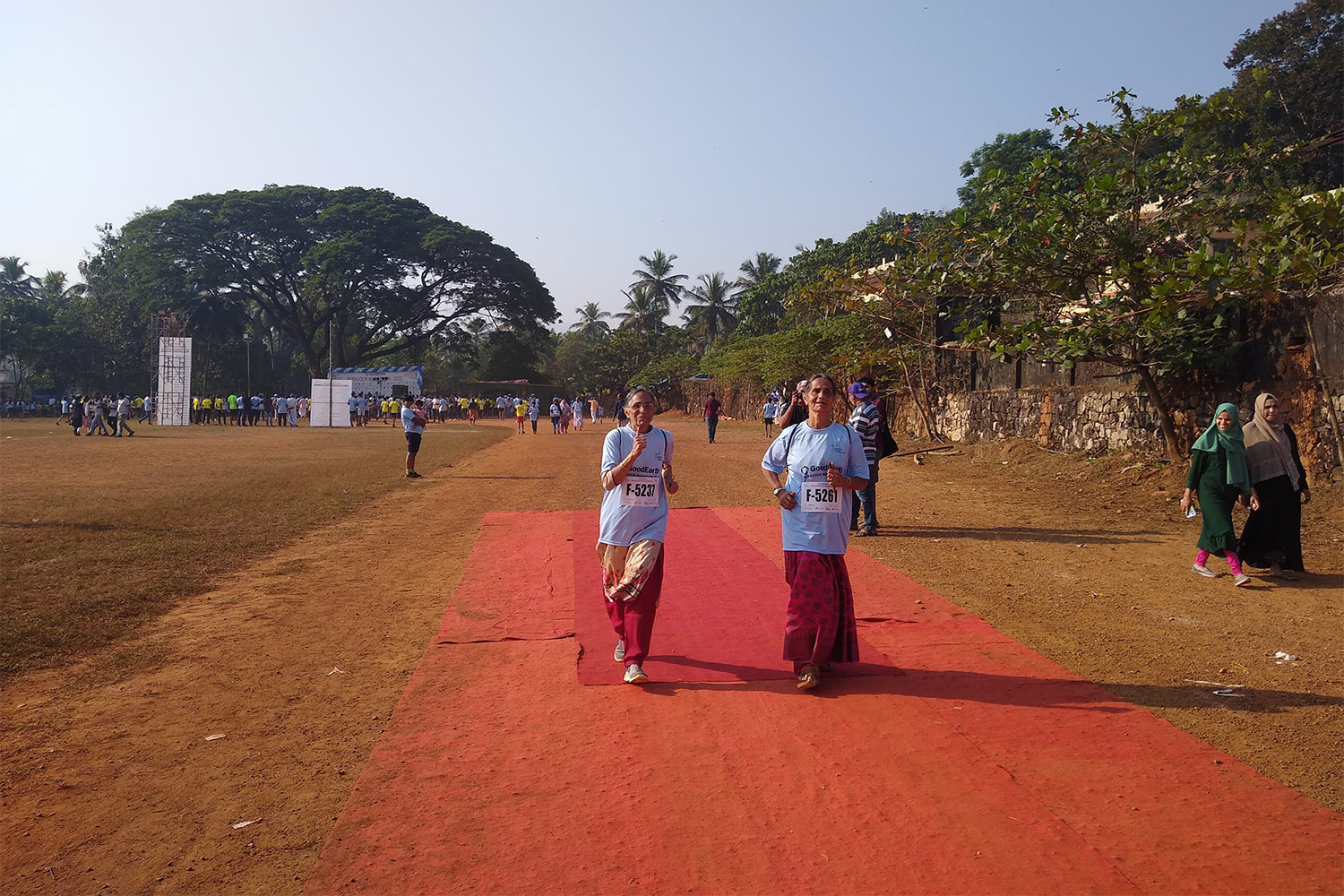 While the 75-year-old Dr Lilly ran the marathon with her childhood friend, an annual ritual.

For Dr Lilly, who attends to more than 900 patients in palliative care with her team through Samaritan Old Age Home and Palliative Care Centre, running the fun run was revisiting the favourite places of her childhood.

She has participated in all the editions of Peravoor Marathon till now.

“The trail is close to my home, and running it is like reliving my childhood. I ran through some of my favourite spaces as a child,” recalls Dr Lilly.

Moved by the wheel-chair race, she noted that their participation was important for it boosted their mental health.

The spirit of the participants in the wheel-chair race was a takeaway for many who had gathered at the playground.

Mothers dressing their children in jerseys encouraging them to run was a sight to behold. Many ran along with their children, a sign of revival and strengthening of the sports culture in the region.

Peravoor appeared to ride on the energy of the marathon.

Many recalled that back in the day, farmers played in the ground following their siesta and the day’s work in the fields. It reinforced bonding, helped them exercise their energies. Thus revived they were ready to face the next day afresh.

However, this time the week-long carnival which culminated in the marathon painted a broad canvas for all sports. 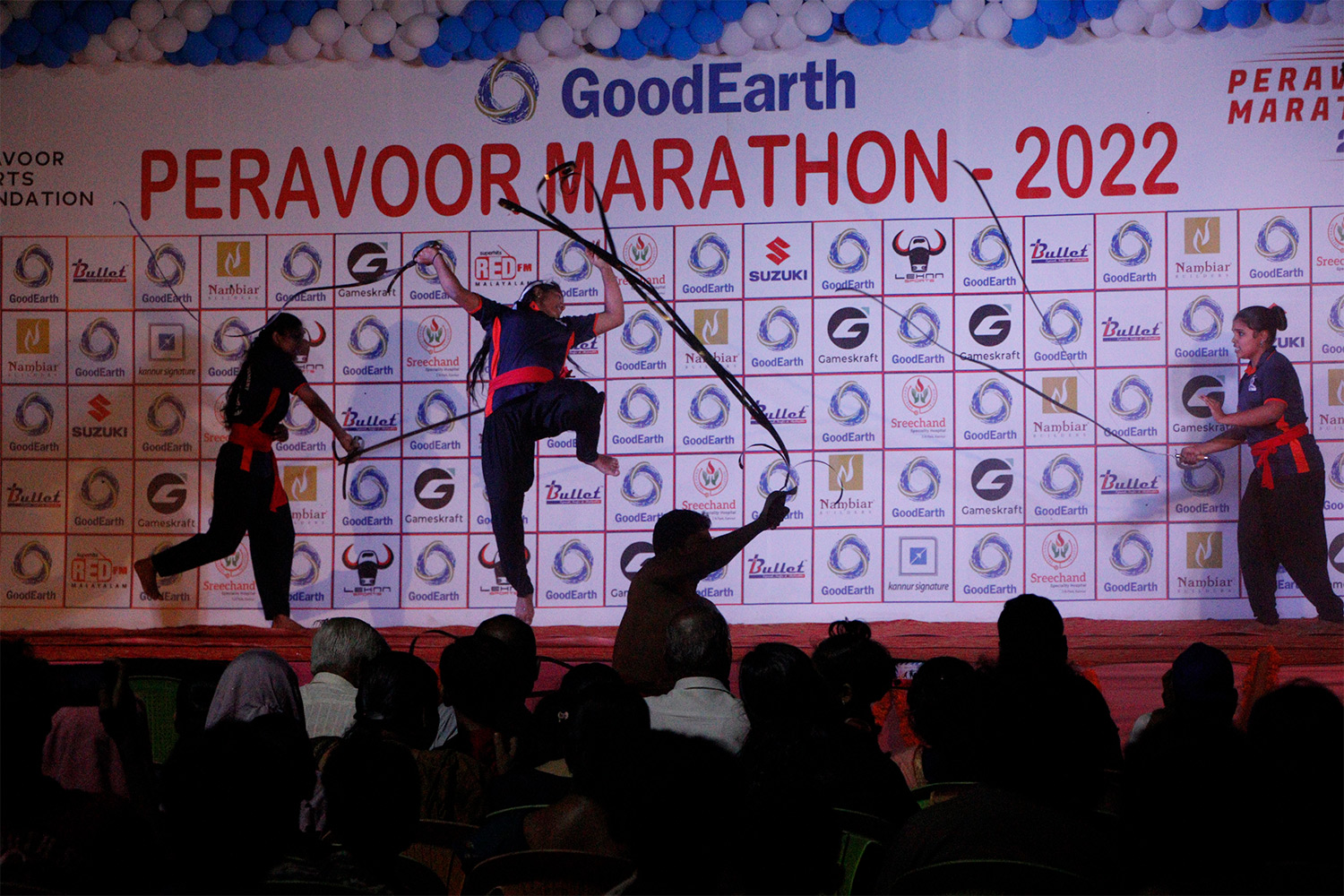 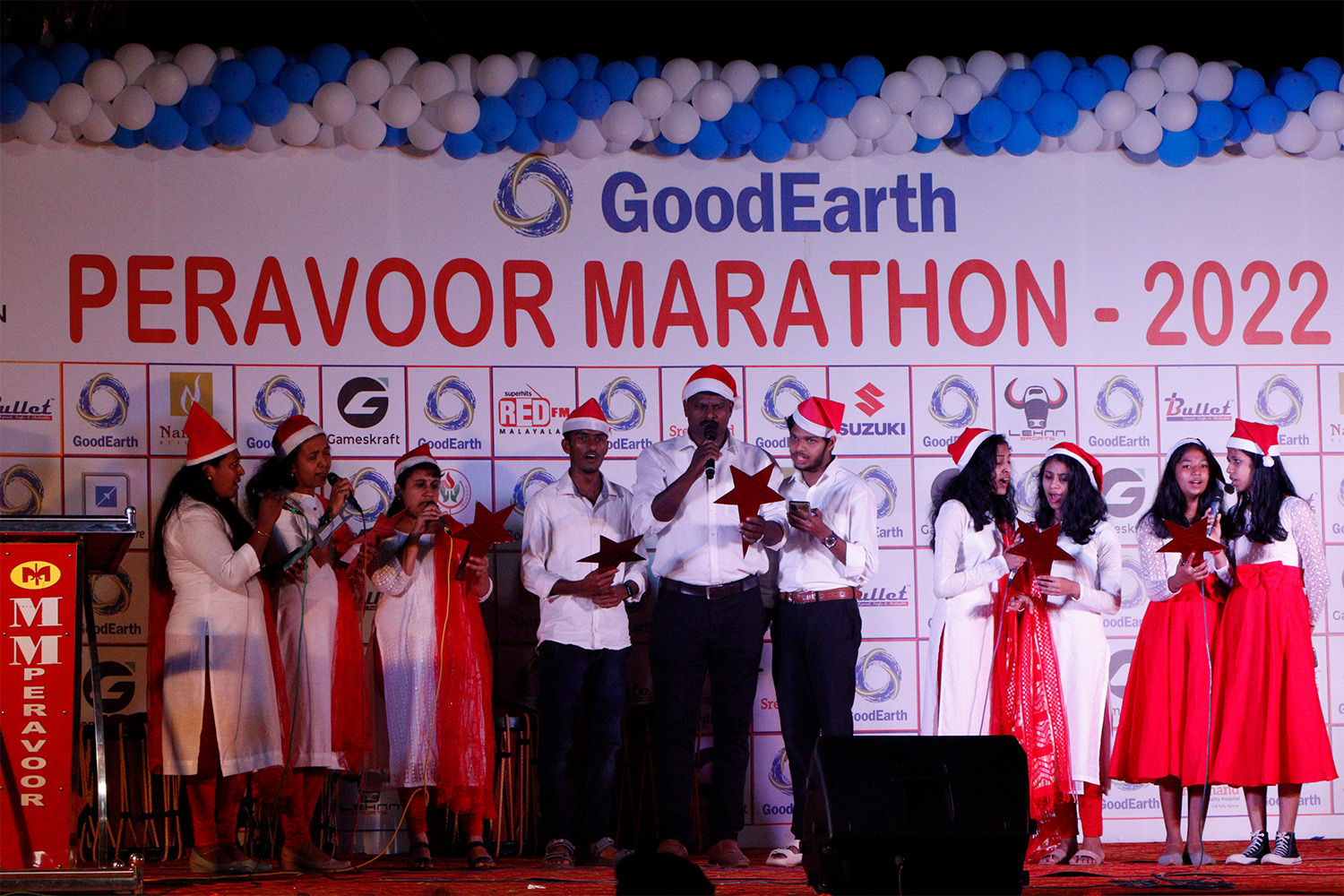 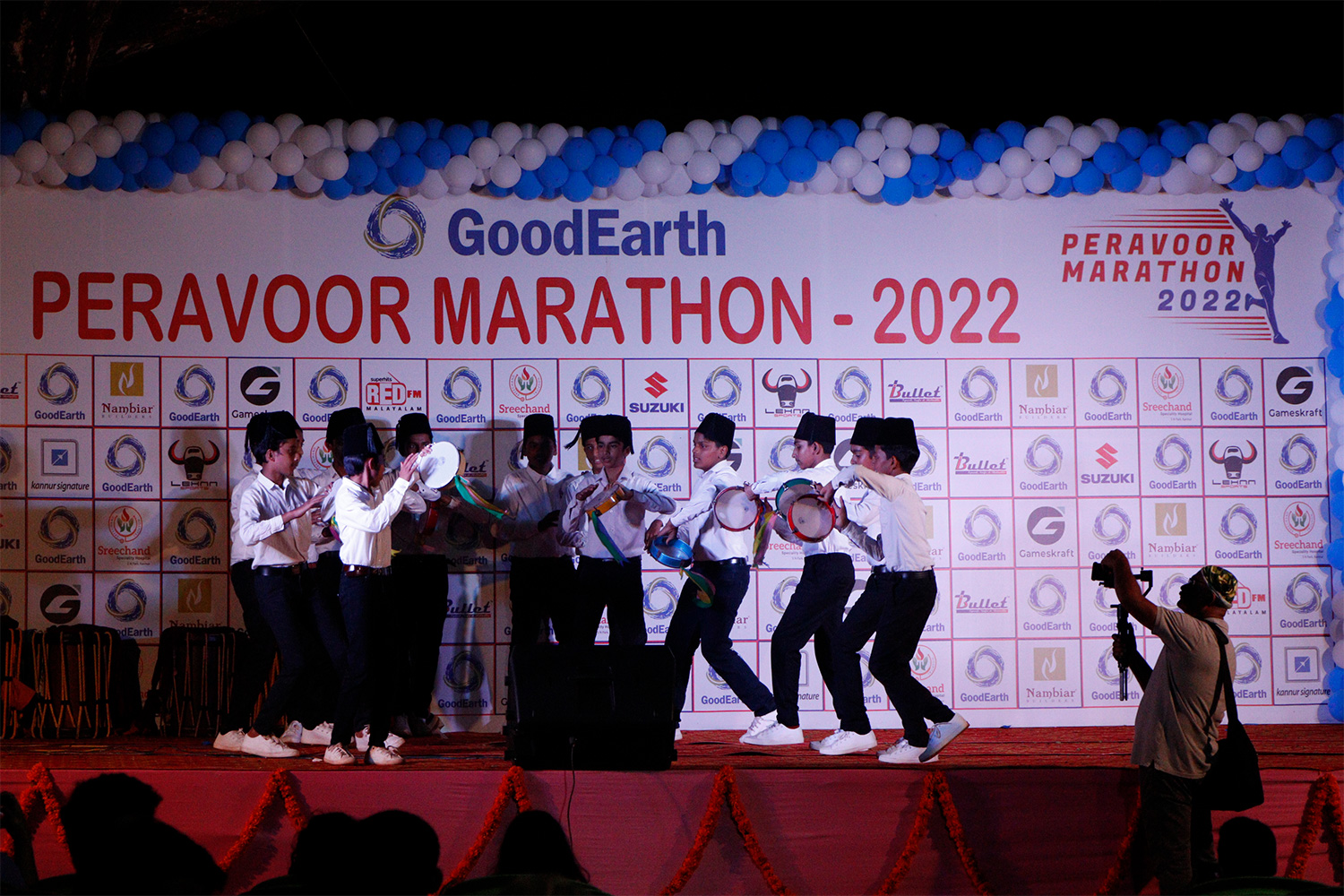 A food festival, performances in traditional Indian martial art form Kalaripayattu, power-packed Chenda Vadyam, Christmas Carols, Duff muttu (an Islamic art form) enthralled the audience and culminated in the fourth edition of the 10.5k run, amid tireless planning and organising by a strongly-led team of volunteers, and people of the region who took it upon themselves to make the annual event a success.

Playgrounds are the greatest equalizer and level-playing field; the real temples, churches and mosques. It’s sports alone that has the power to transcend politics, religion, caste, creed and gender

Peravoor Marathon stands a true testimony to it.

While the wise men over the generations have remarked, “Victory shall not go to one’s head while failure shall not go to the heart,” sports continue to contribute to the wholesome development of personality.

The philosophical premise of body first, which helps one to celebrate life in all its contours, was nowhere more evident than in the marathon. 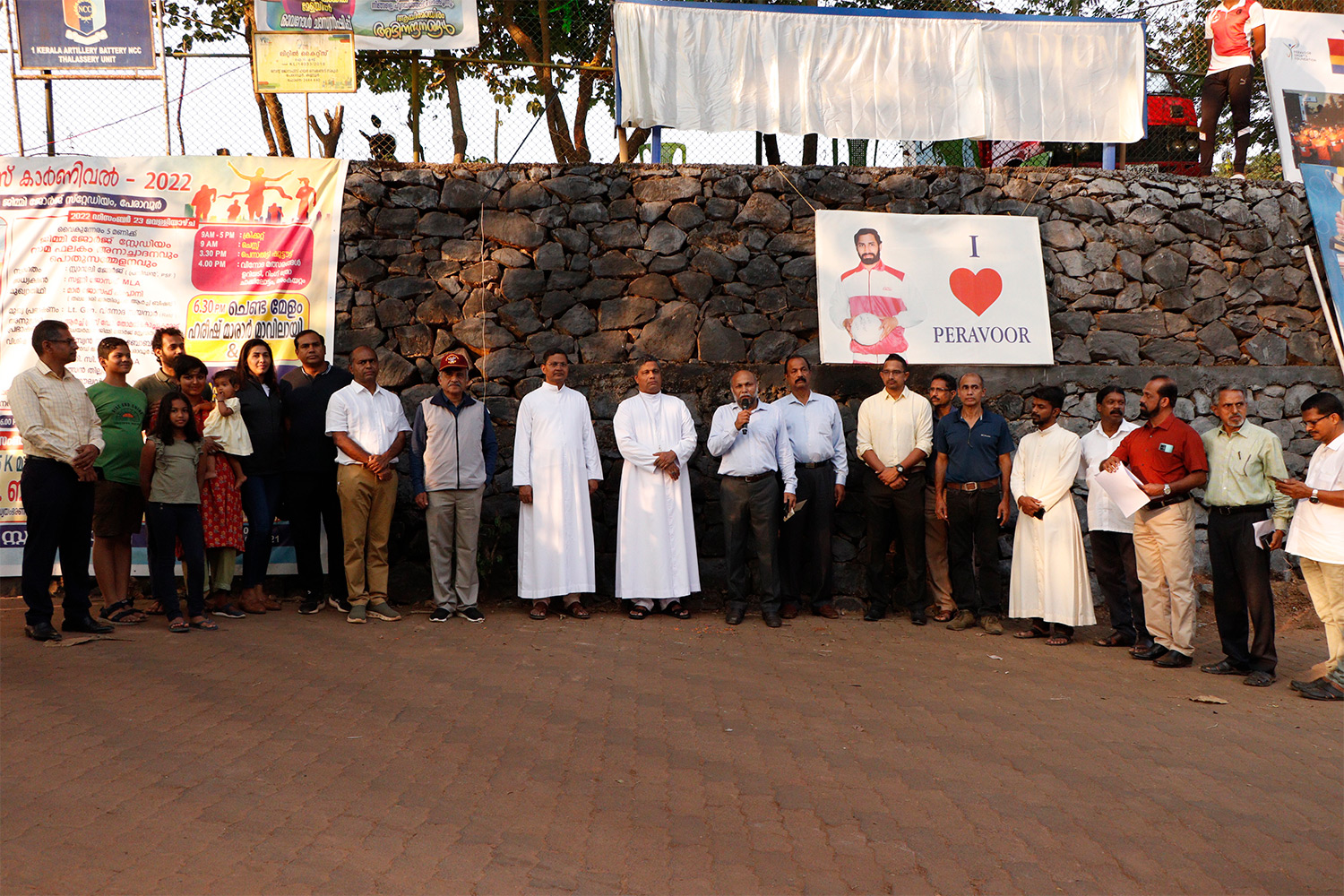 As the runners took on the trail marked by the undulating paths, dense green, and refreshing streams, the cold air took on the energy of the participants and by the time the runners started to cross the finishing line, the whole stadium lit up with the break of dawn.

An all-inclusive marathon, everyone from first-time runners to those building their stamina for the next run participated.

The marathon saw men, women, children, NCC cadets, elderly, parents together with their children, grandparents coaxing their young ones to run the trail soaking in the pristine beauty of the region.

Discipline that sports instills was palpable among the participants.

Byju George who has run as many as nine half marathons says, “Running a quarter marathon is like being introduced to a fitness programme. It’s a prelude to understanding one’s strength.”

“How will we ever know what stuff we are made of, if we don’t try.”

With unabated enthusiasm Mr George explains how running in a group boosts confidence.

“The level of confidence that one gains after participating in the marathon against all odds will remain with the runner for long. The confidence will help her or him to take on the challenges in life head on,” adds Mr George.

The marathon’s main aim is, thus, to trigger the confidence in all.

The happiness of the runners on hitting the finishing line was immeasurable.

St Joseph’s Higher Secondary School Head Master V V Thomas who walked the 10.5 km trail to check before the marathon, ended up running the quarter marathon, his first, and completed it successfully. 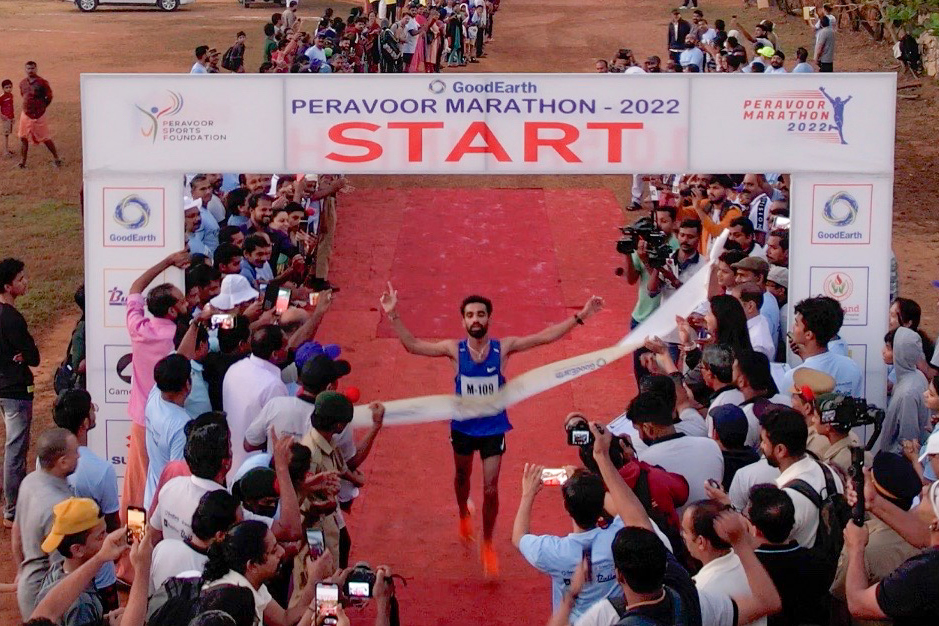 While Shwetha K won the 10.5k Open Women’s category, Chengappa won the Open Men’s category. Chengappa, a native of Coorg, has run many half marathons. He runs 5000 mts and 10,000 mts long-distance.

Providing a canvas for all the sports, and bringing it under one umbrella through the annual marathon, will thus go a long way in strengthening the culture of sports in the region. 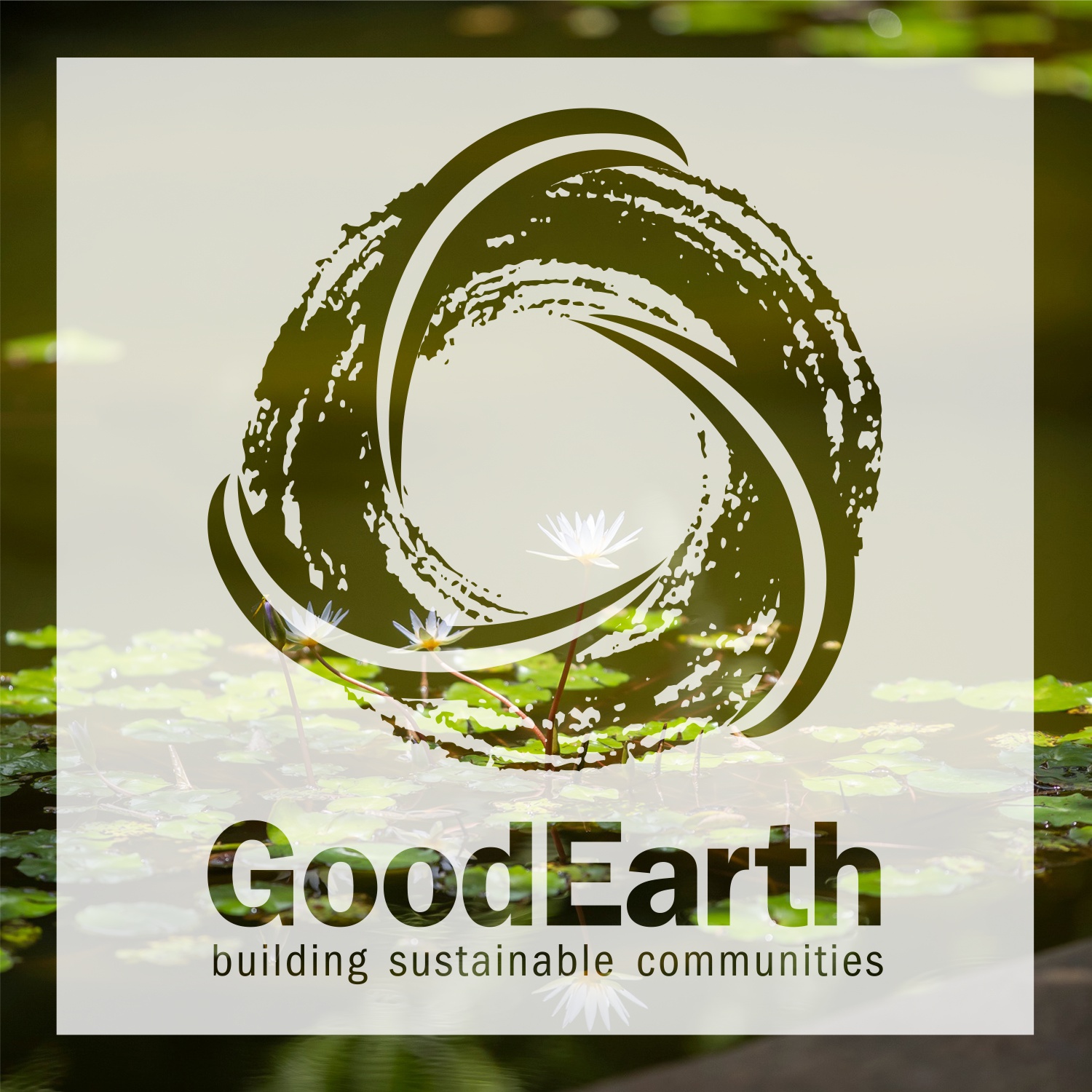