Skip to content
Not just another brick in the wall

Not just another brick in the wall

Iype’s home featured in the MINT

Graduates of Rachana Sansad’s Academy of Architecture (1991) in Mumbai, the Iypes worked closely with Laurie Baker through a design-build collective called ESDC based in Kochi. Having internalized Baker’s inspiration and approach over the years, they were confident of going beyond the dogma that sometimes surrounds Baker’s work.One important step was the decision to become developers after more than a decade of working as consultants. As Jeeth explains, “Our ideas were getting diluted by our clients. We thought it would be better if we became our own clients. That has worked.” In 2007, they appeared in Time magazine, as one among four innovators “building a greener world”.The house the Iypes live in today was the nucleus of their first community housing project. Since moving to Bangalore in 1995, they had been keen on building their own house. Even more so on building a community of people committed to a sustainable lifestyle. Finally, after 10 years, Good Earth Enclave on the outskirts of Bangalore took shape, but only after their children had joined Centre for Learning, a school they had designed and built. A group of teachers and parents make up the community that forms the enclave. 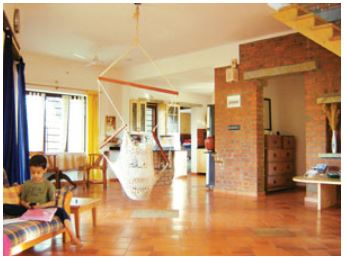 The Iype house (and the Enclave it is part of) talks about a life of connection with nature and with people around. It is sumptuous in terms of space, light, colour and a connection with the outdoors. At the same time, it is extremely economical in the use of material. Economy of cost is achieved in tandem with energy efficiency, especially by using natural materials, and keeping the use of cement and steel to a minimum. The main material of this load-bearing construction (where walls themselves bear the loads and there are no reinforced concrete frames of columns and beams) is brick and it is left exposed on the exterior. Rough granite chapdis(flat slabs) in the lintels of the windows, terracotta tiles on the floor, and rough slate tiles in the bathrooms, make up the rest of the palette. These colourful, rougher and more natural materials offset the neutrality of the cement-plastered interior wall and ceiling surfaces that are painted white. 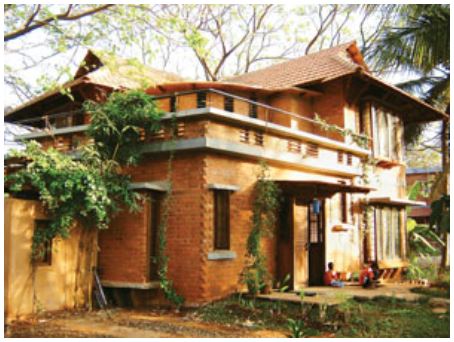 The openness makes sense because it is prudently managed. The living space is largely closed off to the west (except for small delicate openings) to avoid the heat of the afternoon sun. Even the door to the main terrace on the first floor is a single shutter and not an expansive French window. What makes the sense of openness stimulating is the controlled variety of size and detail of the openings, yielding differently framed views of the outside.For those sitting on the fence of sustainability, worrying about whether sustainable design is all about self-denial, this house offers some good news. The Iypes re-emphasize that cost-effective and sustainable architecture means fun space, not dull design. There is no lack of colour because of the variety of materials. There is playfulness in the way the smooth terracotta-tiled floor is randomly interpellated with rougher stones from the exterior paving near the doorways. The bathrooms do not have tiled walls, but polyurethane paint in different shades. The master bathroom even has a tropical bath; it began as another walled-off courtyard to capture the view of a tree. 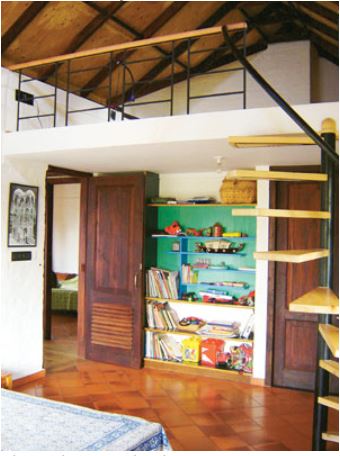 The house derives much of its charm from its setting, which underlines the importance of the Iypes’ commitment to building a viable community.A number of things are unusual about this development. The greenery is one. Parking space for vehicles is far from the centre of social life that it unfortunately occupies in urban projects, where the asphalt chokes the very land on which houses stand. Here, the houses appear to be set in a small garden landscape, with space enough for privacy but not so much it leads to alienation. This is not a townscape of compound walls, though privacy levels are high, and this is because openings have been oriented with respect to other houses and the road around. 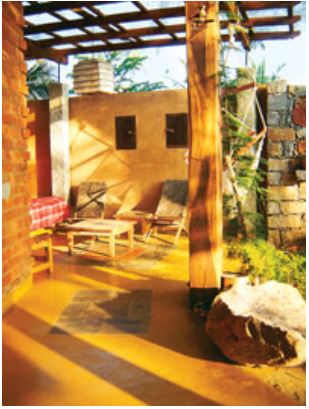 Dream for an eco-village

Does being developers (and not only consultants) put extra pressure on the practitioners of an alternative approach? “Sure, the responsibility is singularly with us,” says Jeeth. “But we do not promise the earth, we take clients along.”
The pressure doesn’t seem to have cramped the Iypes’ dreams. “Our dream is really an eco-village, maybe outside Bangalore somewhere. If we can bring together people who believe in this idea, then it can happen.“Our villages had sustainable social networks, you belonged to the village. Today the sense of belonging is going out of our lives. So, we believe the way to go is to create new villages, and not for all of us to go to the city. It is actually a real option in our networked society.”